Is there a European approach of Service-Learning in Higher Education?

State of the Art of Service-Learning in European Higher Education

Service-Learning is a highly contextualized practice that currently happens in many countries around the world. Cultural, Historical, and political features shape Service-Learning practices, also through terminology. In the year 1990, Jane Kendall found one hundred and forty-seven different terms and descriptions related to Service-Learning. The use of certain terms is influenced by social connotations that some words have. Europe is a diverse continent that includes forty-four countries. The deepest and most updated work that has been done on this topic is the book titled Embedding Service Learning in European Higher Education. Developing a culture of civic engagement (Aramburuzabala et al., 2019).

Local languages and cultural burdens have influenced how to name Service-Learning. In the case of Spain is widely used the literal translation to “Aprendizaje-Servicio”. In Italy happened the opposite, translation of the term Service-Learning to Italian language is avoided because it can be confused with the “ser 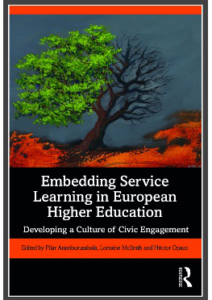 vizio civile nazionale” and other voluntary services, preventing the differentiation of Service-Learning. In the case of Ireland, it is not necessary a translation from English language. In some Post-communist countries, the term Service-Learning is used in English language. In Lithuania, Slovakia, or Croatia, it has been detected a tricky translation to local languages regarding the word ‘service’, because, like in Italy, the translation of the word ‘service’ can be confused as a ‘social service’ issue. Moreover, in Post-communist countries translation also has negative connotations as ‘Voluntary activity’ turned to perception of Service-Learning as ‘a form of unpaid labour to aid the politically powerful’.

1) in the context of activities and reforms of higher education system and alignment with the Bologna Declaration, and

2) Service-Learning also was Introduced through projects funded by the US government.

It is important to note that the birth of this methodology in higher education of these countries was more or less simultaneously. It concurred with their entry as a full member of the European Higher Education Area and Bologna Process. At that moment, these European countries had two features in common:

1) the implementation of new educational strategies, and

2) a longstanding historical and cultural influence of the Catholic Church, even though it is no official state religion.

Currently, in many European countries, more than sixty percent of the population self-identify as catholic (84.7% in Ireland, 71.1% in Spain, 80% in Italy, 86.3% in Croatia, 79% in Lithuania, and 62% in Slovakia). Religion seems not to influence the similarities or differences in the use or translation of the term Service-Learning, even though Catholicism has a long tradition concerning service from a charity perspective. Altogether, it seems to indicate that European countries with a Catholic majority facilitate the implementation of this methodology. 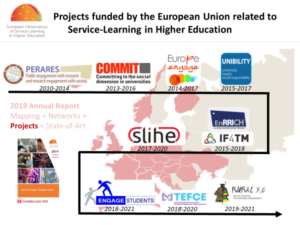 The European Observatory of Service-Learning in Higher Education (EOSLHE) has been working during the year 2019 for recording any activity related to, using different collection procedures. The monitoring was performed by mapping experiences, networks, projects, and asking the experts of the state of the art in their countries. Results of its work has been published in the 2019 Annual Report of EOSLHE. In total, it has been identified that at least in twenty-nine European countries has been activity related with Service-Learning in higher education. In nine of them, also including catholic institutions advocating Service-Learning.

The European Union provides funding for a broad range of initiatives and programmes. The ERASMUS+ funds have made a significant contribution to the development and promotion of Service-Learning methodology. EOSLHE has been collecting information of several projects related to Service-Learning that have been funded by the European Union. From 2010 at present, every year there have been at least one project active or in process. 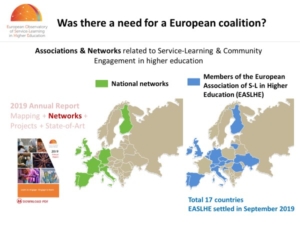 Networks strengths to any activism and movement. There are international and national networks around the globe committed with Service-Learning methodology. In the case of Europe, EOSLHE has found that national networks are mainly consolidated in Western European countries. It is known that there is a Central and Eastern European network that include all educational levels. EOSLHE detected the need of a European coalition. It has been one reason why advocated the formalization and launch of the European Association of Service-Learning in Higher Education (EASLHE) in September two thousand nineteen. EASLHE was born in a natural way as their members have come supporting and working together for years.

Effects of service-learning on migrant people and elderly in Melilla by PETE...
Scroll to top